Forgers fascinate me.  As a calligrapher, I have studied the Uncial hand, font -- my favorite because this was the style that was copied by monks prior to the printing press. Did they copy or did they forge? I believe they copied because of the number of references made of the orders they had to fulfill.

This picture is of commercial artist Durwood Coffey and his painting that I took at an art fair a few years ago. We've been working together for a number of years as I became a self-employed marketing maven back in 1993. Somehow, we met and have been working on projects ever since. He is wonderfully creative and has been very well apprenticed.  We frequently talk about the 'by-gone days" when designers started out emptying the water bowls of the "creatives" as a way to build their skills and learn the elements of composition on the job.

Whenever I give Durwood a design project, I always want to send my idea along, whether it is a "thumbnail" or something I saw somewhere.  Durwood will look at my rough idea and toss them aside coming up with something so much better.  However, he won't even look at the something I "saw somewhere" because he is adament about not copying someone's work as he doesn't want his copied.  Clearly, I respect the man.

Durwood knows about our trip to the Toledo Museum of Art on January 18 for the "I've Been Framed" tour.  It was around 2005/06 that I went to the museum to see their show of the forgeries they purchased.  The docent clearly explained that almost every museum gets duped.  I loved the idea ever since and came up with this tour last year.  The museum was open and honest about it's unique purchases.

There's been a lot of books and some movies about criminal forgers. In my mind, it all started with the Romans, who just weren't clever enough to think for themselves, but blatantly stole from the Greeks who were the chief thinkers of the day. The Romans couldn't even come up with their own gods, but stole theirs. About the only thing they really contributed that was unique was to create one of the most diffcult alphabets: Roman, which was based on the rules of geometry. Well, they did steal that concept from the Greeks who already associated prime numbers with geometery and algebra. Try making a Roman A or M and you'll see what I mean.

In our age, many books and movies about fakes abound because we are just so curious about fakers.

In How To Steal A Million, Audrey Hepburn tries to loot a forgered Cellini made by her grandfather.  Then there's Honore' de Balzac, who wrote Pierre Grassou, about an artist who lives off forgeries.

My absolute favorite forgery is at the Getty Museum: The Getty Kourous, a sculpture of supposedly the perfect male.  It was purchased in 1985 to the tune of $7 million. However, scholars are torn as to whether or not  it is a forgery. No one is sure, but the sign at the Getty Museum says: Greek around 530 BC or a modern forgery. Honesty to be sure.

Heck, even Van Gogh painted a forgery every now and then just to keep the money coming in.

The point is, we're captivted by being duped -- as if it could never happen to us. 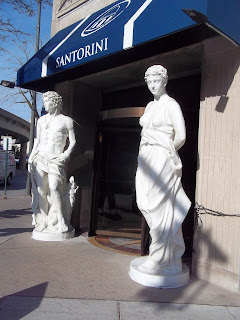 The late Melina Mercouri had been loudly advocating for the return of the Elgin Marbles, about 20 sculptures that graced Grecian classical buildings such as the Parthenon.  According to what I am researching, and believe me, don't trust the Internet for accurate info, but apparently Tom Brice got a "legal" permit from the Turkish Empire for removal of the sculptures in order to transport to Britain.

Mercouri wants them back and who can blame her.  However soulful her plea, there is so much more to this story and many books and papers have been written about the pieces.  But then again, if the Marbles are returned, that it will set a precedent requesting ALL art be returned to its original location. Again, it's a damning scenario, no?

On one hand, if it were not for the "looting", if the statues fell they were burned for the lime -- oh the numbers that have been lost to posterity, how many would actually be in existence? On the other, we are able to enjoy the precious works by flying across the pond.  Bittersweet, eh? It's one of those no-win situations.


Here's what totally shocked me about the marbles.   Did you know that the patina, the paint that was applied so carefully and from natural sources decades ago, was removed from the statues in an effort to make them more saleable? This is just too amazing.

1.The pieces were probably purchased from the Turks (Greece was part of the Ottoman Empire for a time) for a very low price combined with trinkets.
2. Then a bunch of clerks removed the paint.  Tools used then were so primitive and a lot of damage was caused to the statues all for the almighty English Pound

In parts of Greece one can see fragments of color on some sculptures which is utterly priceless in that even those little fragments stayed for all these years.  Imagine the grinding process. How many apprentices did it take for Phidias to be satisfied with the outcome? I would have loved to see his studio.

Though poet Lord Byron didn't care for the sculptures, he strongly voiced that they should be returned and that Elgin was a vandal bar none.

"Dull is the eye that will not weep to see
Thy walls defaced, thy mouldering shrines removed
By British hands, which it had best behoved
To guard those relics ne'er to be restored.'
Posted by step on bus tours at 8:29 AM 1 comment:

About Step On Bus Tours